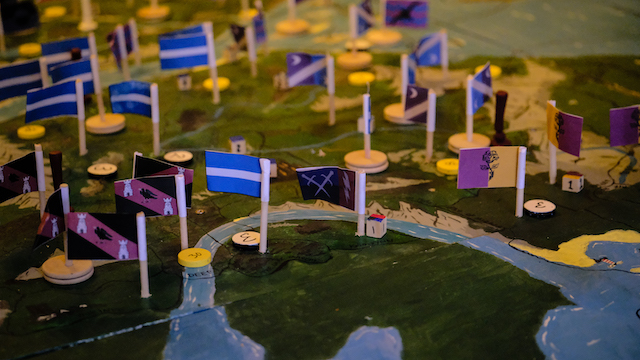 Conquest represents the tides of war, as realms seize control and do battle across the Hundred Realms. Land is one of the most valuable assets that can be controlled, allowing resources to be gathered to fund a realm, borders to be secured, and treasures to be uncovered.

The next year's wars can be predicted by submitting orders and plans to the Oracular Mirror, and receiving the results. This page details how to manage your Realm and play the Conquest game. Importantly, it is worth noting that the battles foretold in Conquest will come to pass over the course of the next year (between events), but by the end of the Event will not yet have happened. 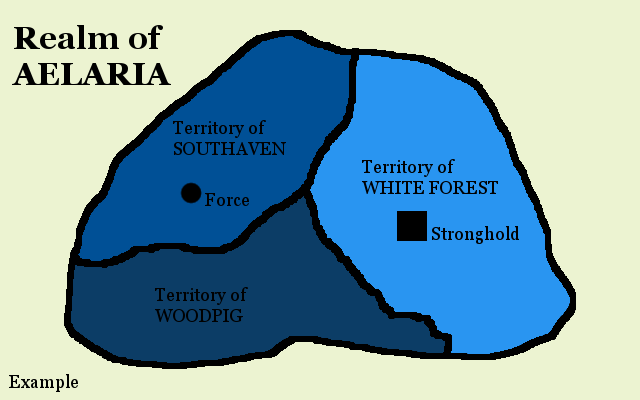 Orders will not last between phases. Once an order has been submitted, it cannot be taken back

Some Territories will generate Resources each phase. These are usually in the form of Beans and Coins. The Resources generated by the Territory will be marked on the Conquest map. Resources for each realm may be collected by presenting the Monarch’s Crest for a realm, though this may be given to anyone. Resources may only be collected by a Realm if it has control of at least one Stronghold.

Though Resources will persist between Phases (and between Events), Realms should endeavour to ensure someone is sent to collect the Resources every Phase. Resources can be collected at any point in each Phase as long as the Conquest table is open.

The Hundred Realms has always been a place of war, and with no clear leader, many Realms attempt seize whatever lands they can. To do so, forces from each Realm roam about under control of their generals, to both defend their own Realms, and to conquer new territories.

Each Force can perform one Order per phase There are a number of free Orders that a force can do, that require no additional cost. They can roughly be grouped into 3 different types:

If a Territory is friendly, or has strength is at 0 or less after Attacks, Fortifies, and Spells have been resolved, then a Territory may be moved into. Depending on the type of movement a force does, may or may change the ownership of the Territory it has moved into. If multiple Realms are attempting to move into a territory, the total number of Move, Invade, and Support orders for each realm will be combined, and the Realm with the highest total successfully moves into the territory, with other competing orders failing.

This is the simplest type of Order. Disbanding is the process of getting rid of a force on the table. There is only one disband Order

There are a number of special moves that require additional resources to perform. Often these moves are non-standard, and might not be orders given to an existing force. There are many special Orders that might exist, but only some of them are known. In order to submit special Order, you need to pay the cost to one of the Conquest Refs, and say which special Order that you want. You will be given a card for the special Order that can be submitted in the same way as a normal order a normal order. Note that once you have the special Order card it is your responsibility to look after it, and it will only take effect if you submit it.

Only things that exist during the submission phase can be given Orders. This means that if a Force comes into existence (whether it be being raised using an Order, magic scroll, or anything else), it cannot be given another order until the next phase.

Submitting orders is a simple process. Around the Conquest table there will be slips for each of the free orders. You may freely take these slips to give your units orders, by specifying the unit and what you want it to do.

You then need to hand these orders to the Conquest refs. Once an Order has been handed to the ref, you cannot take it back. Only the General for a Realm may submit Conquest orders to the refs, this will be checked when you submit an Order. If multiple Orders are submitted for the same Force, they will be resolved in the Order described below, with only the first Order for a Force being selected. If there are two Orders that would be resolved simultaneously for the same Force, one will be selected at random for the Force. It is thus up to the General of each Realm to ensure that the correct Orders are submitted.

Orders that are deemed ambiguous, or do not specify which Force is being ordered, will be considered void and discarded.

If no Orders are received by any Force for a Realm, it will be assumed that all Forces have been given the Fortify Order. If one Force receives orders and the others do not, this assumption will not be made.

Anyone can cast a spell on the Conquest table. This may be done by handing a scroll to a Conquest Ref when the table is open.

After the table closes, all orders and spells will be resolved. This happens in the following order: