This page will go into detail on exact interactions. Reading the content of this page may be helpful for Generals, but not required reading.

If you believe an example for how a situation would play out would be beneficial, email talesuntold.larp@gmail.com to request it and we will consider adding it to this page. 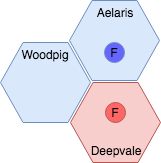 The following would be valid orders but unsuccessful:

Now, if the Aelarian General (BLUE) gave a MOVE TO WOODPIG Order to their Force, the orders above would play out differently: 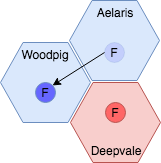 The following Orders are successful for Scoraxia:

Not what you were expecting? Remember that Strength is calculated before movement is evaluated, so even though the Aelarian Force is moving to a new Territory, the Territory it is moving from still gains the Strength bonus from the Force being present.

How might the Scoraxian player successfully invade a Territory with a Force in then? Use of Magic to reduce the Strength, or assistance from another Force with the ATTACK order. Therefore things change if Scoraxia has two Forces in neighbouring Territories: 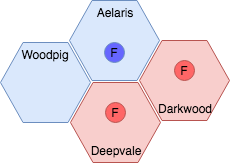 The Scoraxian General can now deliver orders to both of the Forces. In order to successfully Invade Aelaris, the Scoraxian general needs to submit the following orders:

The ATTACK Order will reduce the Strength of Aelaris by 1 (to 0) and the INVADE Order will therefore be successful and the Territory would be claimed. The Force would not necessarily have to Invade and could use the Move To Order instead. If the Aelarian Force does not move, it would be destroyed by Scoraxian Force moving into the Territory.

This would be unsuccessful if the Aelarian Force took the FORTIFY order (since the Strength would not be reduced to 0 by the attack). Either Magic or the additional efforts of a third Force would be required to take the Territory in that case.